Patient experience: SIBO and weight gain in the midsection

I had a long battle with SIBO. I was finally treated with antimicrobials prescribed by Dr Freeman and two rounds of antibiotics.*

I was scared to take too many rounds of antibiotics as I think other antibiotics may have triggered my SIBO in the first place. That’s why I decided to take antibiotics for only two of my four rounds of treatment. Both treatments seemed to work equally as effectively, but everyone is different.

My symptoms got worse over the first five days of treatment.

With my first round of antibiotics, my symptoms got worse over the first five days and then started to improve. My symptoms were better by the end of my course, but only by about 50%.

One week later, I decided to start on the antimicrobials, and the die-off symptoms were less severe (probably because a lot of the die-off had already occurred). I probably improved by another 50% from my new starting point, making me roughly 75% better.

After this, I took one more round of both because I wanted to make a complete and not partial recovery. All my treatments were over six months. I could have stopped early, but I wanted to be completely symptom-free and have my carefree life back.

I want to talk about something I found very interesting. In my time struggling with SIBO, I ate a very healthy diet. I’ve always been very lean, but I started to notice I was storing fat in my midsection disproportionately to the rest of my body.

My midsection on my very first day of treatment

I started to lose stubborn weight with no effort!

During my treatment, particularly after my first antibiotics and the first round of antimicrobials, I started to lose stubborn weight with no effort. I had been struggling to lose the weight for years while living with SIBO. I was substantially hungrier without the constant pressure on my stomach bag and consumed a lot more food than I had been when I was in the worst of my SIBO.

I used my fitness pal, both while I had SIBO and after. On average, I was eating nearly double what I once was. Yet, I lost weight. That didn’t make sense to me. I was pleased about it, but it went against everything doctors and media had told me about weight.

Dr Freeman explained this was not uncommon with SIBO, and it’s a common misconception that SIBO is always correlated to weight loss. It causes weight gain in some people.

He explained to me I was probably extracting more energy from foods than I should be, and therefore, even though I was eating very low calories, my body was able to extract more calories through the bacteria in my small intestine and delayed transit times.

I want to say that I was not overweight when I had SIBO. But I had always just had a very lean midsection, and this had drastically changed. 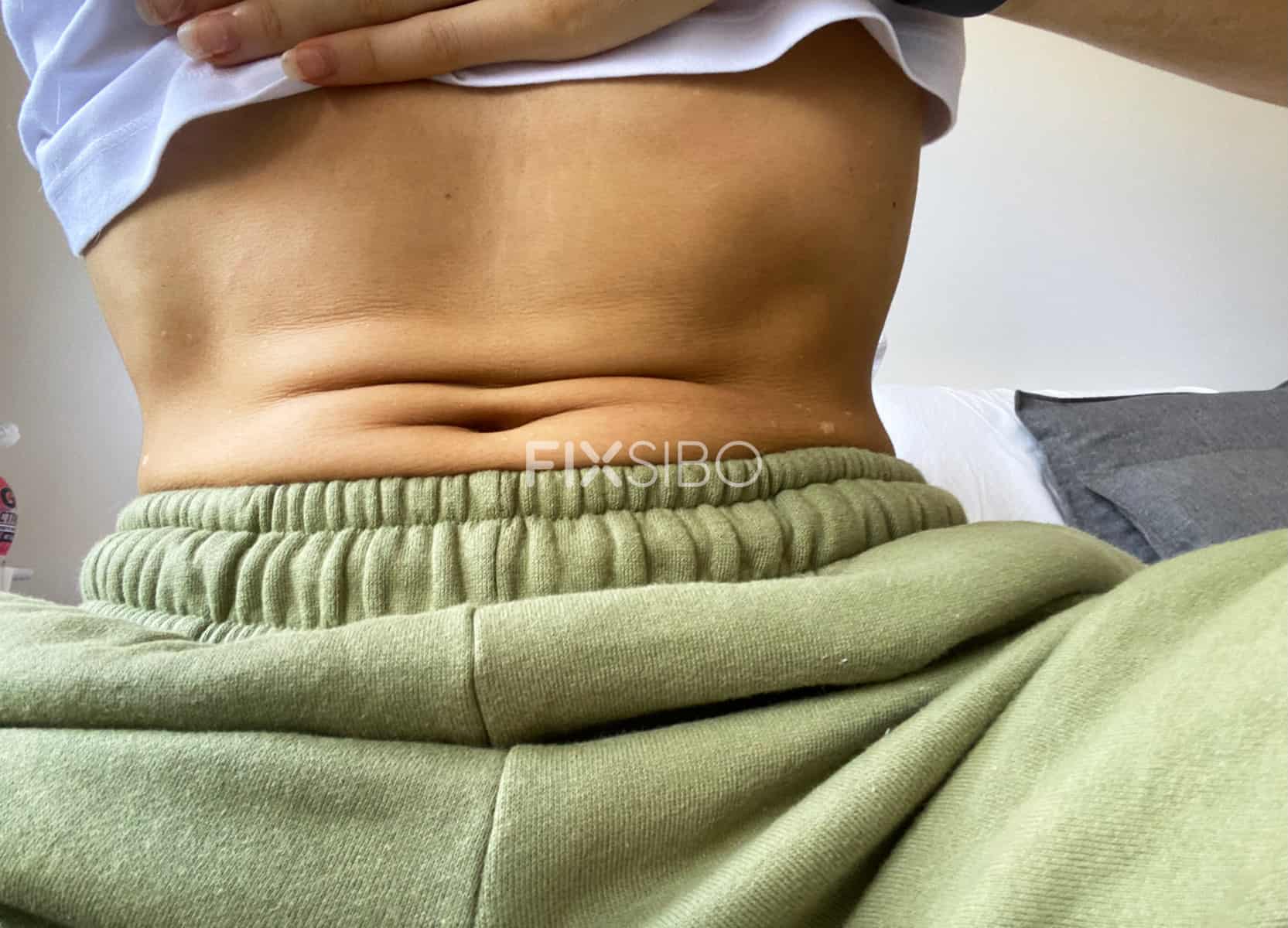 My midsection now in the same position

As you can see, I have lost a substantial amount of fat from my midsection. I have also lost the bloating, which helps my stomach look flatter in general.

There has been a fundamental change in the amount of fat I am storing in this area. My family has a risk of heart disease, and I know that excess fat in the central area is a risk factor.

I want to emphasise again that I was not overweight in either photo – in fact, my weight has only changed by a few kgs in total, but that seems to have come off the area I primarily stored it in during my struggles with SIBO.

This was a frustrating experience for me, so I just wanted to share it in case others have the same issue and can’t seem to get answers. Dr Freeman informed me that some studies have observed this happening in larger groups.

I share my experience, not to say that weight by any means is the most crucial issue that SIBO causes. But to give hope to those going through similar frustrations.

I ate very healthy and was active, even though it was sometimes painful. Yet, I still accumulated fat in my midsection that didn’t respond to diet or exercise. That worried me about developing other conditions. If you are also going through a similar struggle, I want to provide some hope.

Patient experience: SIBO and weight gain in the midsection